Jesus Wept, So Did We

As we drove up into the City of Jerusalem, Commissioner Francis sang a heartwarming rendition of the song “Jerusalem.” My heart started to beat faster and faster as the view of the city came into sight. We got off the bus near the eastern wall of the old Jerusalem. We began our advent into the city through the Lions’ Gate. The little marbled street called “Straight Street” is filled with vendors selling various souvenirs and artifacts.
We arrived at the Church of the Holy Sepulcher, located in the Christian quarter of the city. This is the place traditionally considered as the place where Jesus’ tomb is located. I admired the glamorous decor. The sweet scent of burning incense enhanced my desire to pray. I was a man conflicted, though. While I wanted to reflect on Christ’s work, I struggled with the appearance of worshipping the stones and idols.
We left to follow Christ’s road to the cross – the Via Dolorosa, stopping to pray at various Stations of the cross. It was disheartening to see how the whole area had now become Muslim. I reflected on our Lord’s suffering, carrying the wooden cross up the steep hill. How painful and difficult that must have been.
After completing walking the Via Dolorosa, we left the city through the Java gate. There we boarded the bus to head for lunch at the Olive Tree Restaurant. Lunch was delicious, comprising a rich selection of vegetables, then bread, rice, chicken, fish, and other meats.

From there, we headed up to the Mount of Olives. We paused to take a picture in front of the Mount of Olives Church. Behind us was the picturesque view of the City of Jerusalem. Towering of the ancient walls and buildings was the Temple Mount, with its bright, golden dome.

We started the steady, slow walk down the hill along the Palm Sunday street. This is where Jesus rode the donkey into Jerusalem. We stopped at the place where Jesus prayed for Jerusalem. A beautiful church sits on the site. The church is designed to look like a tear drop. It is called the Church of Dominus Flevit, situated on the upper western slope of the Mount of Olives. I was overcome by emotions as I reflected on our Lord weeping over Jerusalem.
We walked further down to the Garden of Gethsemane. There were old olive trees in a fenced area. We were greeted by a stunning church, whose architectural design left me speechless. The front was decorated in eye catching designs and icons. The windows had purples colors that formed a cross. The inside of the church was enchanting. The ceiling formed glamorous cross, while Jesus, the Shepherd watched down on His flock. I felt a chill down my spine. I was standing in the place where our Lord spent the night in prayer. 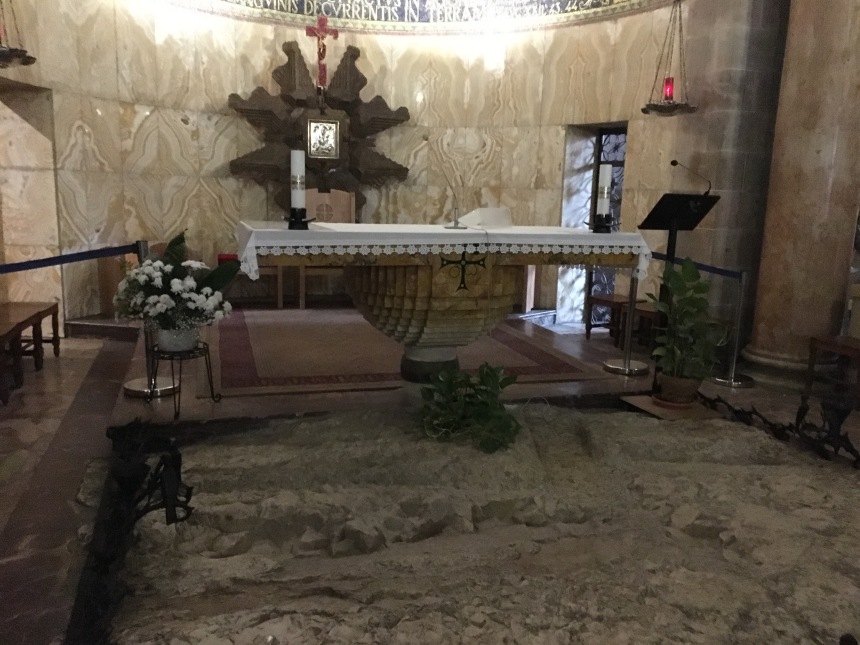 Rutendo and I started singing the hymn whose words go something like this: “In the garden Gethsemane, in Darkness a voice was heard. The voice of Jesus praying to His Father.” We both wept, as we considered the suffering our Lord endured to set us free. Salvation is free but not cheap. It cost God His son. It cost Jesus His life. We should never cheapen the work He did for our salvation. Thank you Jesus.